Heather Abbott – a survivor of the 2013 Boston Marathon bombings and a peer counselor who helps others transition to a life as an amputee – offered three keys to happiness to Southern students during the 2015 undergraduate commencement exercises at the Webster Bank Arena in Bridgeport.

“Accept it and move on. Get off the island. And share the spirit,” Abbott said. “Yes, admittedly, some of this is what I’ve learned from my own years of life experience. But most of this was learned…from one sunny spring day in Boston.”

Abbott was referring to a major injury to her left foot after being struck by shrapnel from the second of the two bombs that exploded on the fateful day of April 15, 2013. She eventually lost part of her left leg as a result of the injury after several surgeries were done in an attempt to save her leg. The bombs killed three people and injured more than 260 others.

But she has proven to be resilient. Less than a month after the bombings, she threw out the ceremonial first pitch at Boston’s Fenway Park. Four months after the bombings, she was able to live on her own again and returned to her job as a human resources manager on a part-time basis. And today, she has four different prosthetic legs – each designed with a specific purpose or activity in mind. One is specifically designed for running, while another enables her to wear high heels. She also helps others as a National Amputee Coalition-certified peer counselor.

A total of 1,234 students were eligible to receive bachelor’s degrees and about 900 participated in the ceremony. A day earlier, graduate students participated in their own commencement exercises – one in the afternoon, the other in the evening -- at SCSU’s Lyman Center for the Performing Arts.

“As a survivor, the only choice is to move on -- to pick yourself up, think about where you want to go, and get on the path away from shock and sadness, and back to the life you deserve,” Abbott said.

She said it was important for her to “get off the island.” In other words, she had to admit that she needed the help of others, and that the graduates also should not pretend they can do everything all by themselves. “Locking yourself up in solitary confinement is just not going to cut it,” she said.

And Abbott urged the graduates to help others. “In the next chapter of your lives, do what you can for others. As graduates, you have advantages. You have strengths and confidence that others may have been denied. Be a catalyst for good, for self-determination and for personal freedom. Reach out -- whether in simple interactions with family and friends, in expressions or demonstrations of support, or in volunteering with organizations looking for people willing to pay it forward.”

President Mary A. Papazian encouraged the graduates to make the most of their education, despite turbulent times – both in the United States and around the globe.

“What you do with everything you have learned and experienced at Southern, will ultimately help shape the character of the times in which we live,” Papazian said.

“Certainly, you are well-equipped to make your mark,” she added. “During your years at Southern, we have helped you develop the intellectual and personal skills to learn, to explore, to build and to create far beyond anything that was available to past generations.”

She noted the breathtaking technological changes that have taken place in recent years and those that are on the horizon, such as self-driving cars. “So fasten your seat belts, and get ready to plunge head long into this brave new world with your Southern education to guide and sustain you.”

Other commencement speakers included Nicholas M. Donofrio, chairman of the state Board of Regents for Higher Education; New Haven Mayor Toni N. Harp; Jynelle Smith, president of the SCSU Class of 2015. John Searles, an SCSU alumnus who is a bestselling novelist, received an honorary doctorate.

Abbott met with a small group of graduates before the ceremony, where she discussed her experiences during the last two years.

Congrats to the Southern Connecticut State University Class of 2015! It was such an honor to deliver your... http://t.co/38KOzX2V5S

@SCSUtweet @Heather_Abbott1 you're lucky to have her. She's a wonderful person!

Author, Editor
Recipient of the Honorary Doctorate of Humane Letters

John Searles was born and raised in New England, the son of a truck-driver father and stay-at-home mom. When he was a teen, his parents announced that they were going to start sending him trucking with his dad in order to “make a man out of him.” Since he could only stare out the window or listen to the crackle of other truckers’ voices on the CB for so long, Searles began devouring books on those trips. Those books, and all the miles on the road, made him a reader and a writer.

After his high school graduation, Searles got a job at the nearby Dupont factory, where he gathered parts for various job orders. It didn’t take him long to realize the place wasn’t for him. But he set his sights on becoming the first person in his family to attend college, and to save money for tuition, he stayed on at the factory and worked a night job as a telemarketer. When he had finally saved enough, Searles quit the factory and began commuting to Southern Connecticut State University. He majored in business, because he thought it was practical, but minored in creative writing because he loved it.

A year before graduation, Searles lost his younger sister Shannon to a childhood illness. This tragedy led him to pursue his writing more seriously, and he went on to win a number of writing awards from the university. Encouraged by this recognition, he moved to New York City to seek a master’s degree in creative writing at New York University, where he was twice awarded a major fiction prize for his short stories and also began writing a novel called Stones in the Airfield. After NYU, Searles waited tables and attempted to publish his novel. Upon attending a writer’s conference in South Carolina, he met the fiction editor of Redbook, who offered him a freelance job reading short story submissions. He worked at that job for over a year until he was given a part-time position in the books department at Cosmopolitan.

Searles went on to serve as the books editor at the magazine, and eventually became the Editorial Brand Director as well. Under this newly created position, he launched a book line, which grew to over one million books in print. He also oversaw the magazine’s website, increasing its monthly unique visitors from 500,000 to over five million. He managed the launch of Cosmo Radio on SiriusXM, CosmoTV in Canada, a Cosmo movie called Beauty & the Briefcase starring Hilary Duff, and numerous other successful brand extensions. Searles continues to work with the magazine as Editor-at-Large.

Searles began writing his novel Boy Still Missing while balancing his magazine career, and in 2001, the book was published and went on to become a national bestseller. Hailed as “riveting” by The New York Times and “hypnotic” by Entertainment Weekly, the novel inspired Time magazine to name him a “Person to Watch” and the New York Daily News to name him a “New Yorker to Watch.” His second novel, Strange but True, also a national bestseller, was praised as “sinister and complex” by Janet Maslin of The New York Times and “extraordinary” by Publishers Weekly. Both novels have been optioned for film, and Searles wrote the screenplay to Strange but True, which has been purchased by GreeneStreet Films in partnership with award-winning producer Ross Katz.

Searles frequently appears on NBC’s Today Show and CBS’s The Early Show to discuss his favorite book selections. He has also appeared on NPR’s Fresh Air, Live! With Regis and Kelly, and CNN. His essays, articles, and reviews have been published in the Washington Post, The New York Times, Redbook, Out, The Daily Beast, and many other national magazines and newspapers.

And so it begins! #SCSU2015 pic.twitter.com/7oCseIyvCM 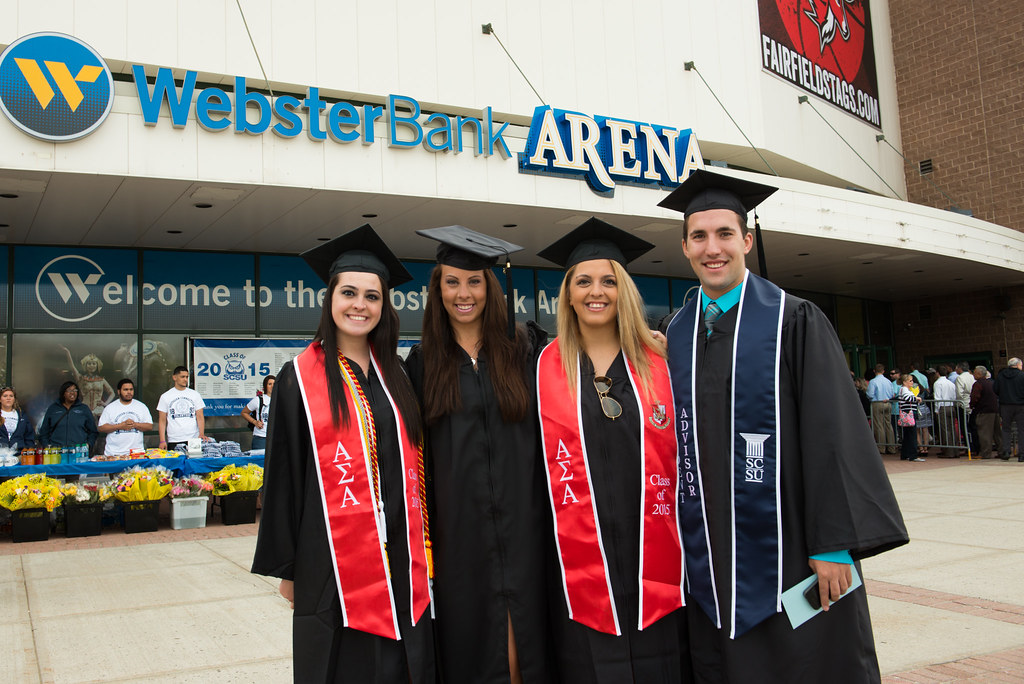 School of Arts and Sciences
School of Health and Human Services

School of Education
School of Business

Had a great weekend, truly blessed to have graduated from The Southern Connecticut State University!… https://t.co/REAOd4vO5D

The SCSU Geese are graduating! Thank you for a great 2 years! pic.twitter.com/Ksr0Fdiaqz

Congrats to my cousin for graduating from Southern Connecticut State University today, I'm next 😊❤️🎓

Love seeing all the pictures from @SCSUtweet commencement! You all are living the dream! #goowls #proudalum

Congratulations to all my friends who graduated SCSU today! Love you guys! 🙌

Congrats to my cousin for graduating from Southern Connecticut State University today, I'm next 😊❤️🎓

Every end has a new beginning. Share your caps! #SCSUCaps #SCSU2015 pic.twitter.com/8z4j6opssV

Thank you to the family who always believes in me. #SCSUCaps #SCSU2015 pic.twitter.com/0Icu9IcGYQ

We serve as a virtual conduit for our alumni, by offering networking opportunities, both social and professional, family events, seminars and panels about the issues that matter most to you and of course, Homecoming.